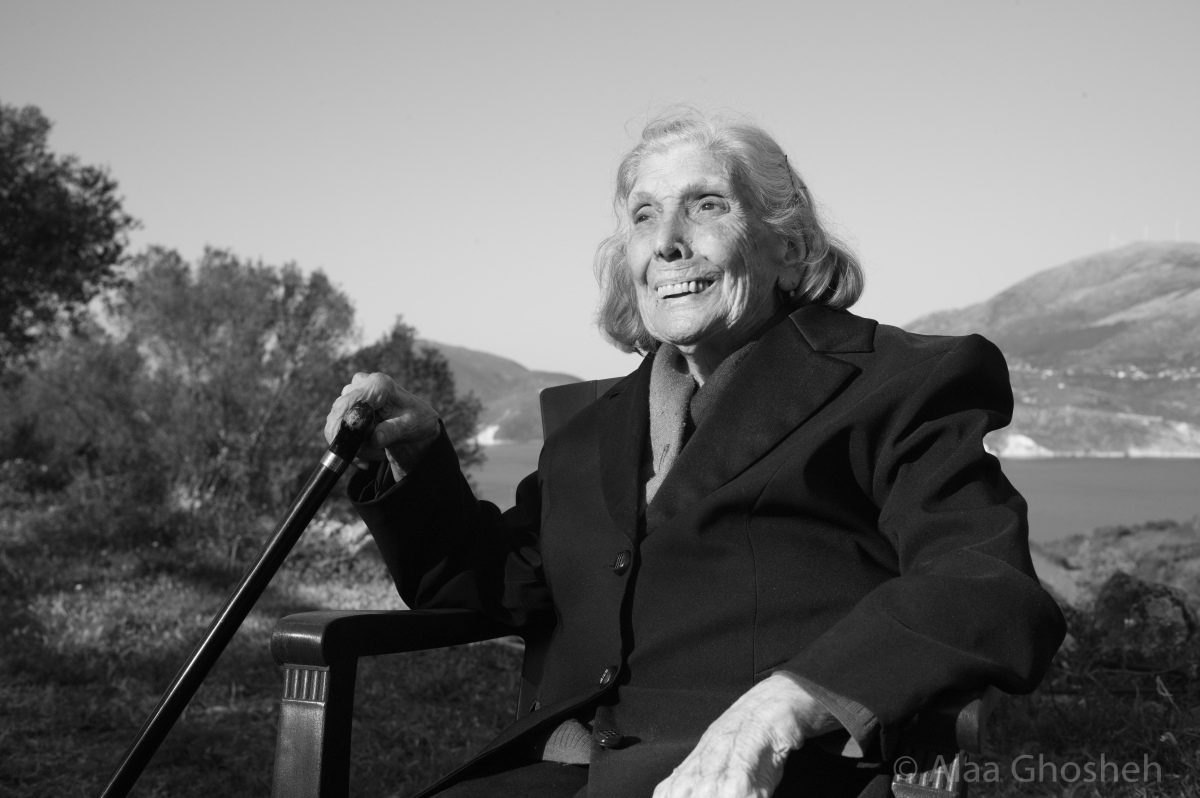 For us mediterraneans, fasting is usually a celebration but most of the time it’s a bad idea, as bad as my partner asking me to detox for a week. This time I’m exaggerating, this wasn’t one of those Old City Ramadan occasions,  where the smell of fresh bread and pickled stuff and stuffed pickles assaults you from one corner to another throughout Bab-huta. In Greece, these few “fasting days”  were by the sea, on one iconic island, surrounded by amazing people. By default you can eat and drink all you want just don’t fuck with any of the sheep / lamb things.

One of my best friends Katia Stefanatou, invited us to her world to spend Easter with her family who come from that island (Kefalonia), generation after generation. Her sweet loving golden father, Agamemnon, who, after trying out his own homemade wine and switching unknowingly to vinegar, we called “Agi”. It wasn’t my fault by the way, I took a bullet for that mix (wine/vinegar), not knowing that everything he produces is stored in the exact same plastic bottle.

Usual me, craving meat even though I probably should have embraced vegetarianism a few moons ago, not that I care more than you about the planet but since I never feel the same after eating it (prosciutto doesn’t count). For 2 days I lived spotting chickens, sheep and more strolling around me but we had to wait – and to be honest that night when lent was over, it was epic! The things we share culturally, (Greeks and Palestinians) delicious and disgusting ,was all there, from the stomach of the sheep kind of soup to the family vibes and occasional vulgarity.

That night with our stomachs filled to the top of our necks, mumbling greek like a bouzouki star with all ages of Katia’s family “we are talking between 20 to 100”, we went out for the Easter parade, I thought it would be similar to what I lived in the Old City of Jerusalem, silly me, it was magical even with all the kids placed like pawns and the gold wearing grumpy priests, it was fun, dark, and we will do it again if we can.

The next day, fighting a hangover and indigestion, we headed to a huge property the family owns, where the lamb was rolling with the times since morning and overwhelming amounts of rosemary were burning, the smell was just perfect.

I leave you with some photos taken during that visit and I would like to dedicate this to two amazing ladies – Aggeliki Stefanatou and Amalia Kyraggelou – best friends who have shared a lifetime together. The latter of whom passed away shortly after our visit at the ripe age of 94. Smoking her last cigarette, having lived a fully and happy life.  If we could all be so lucky… 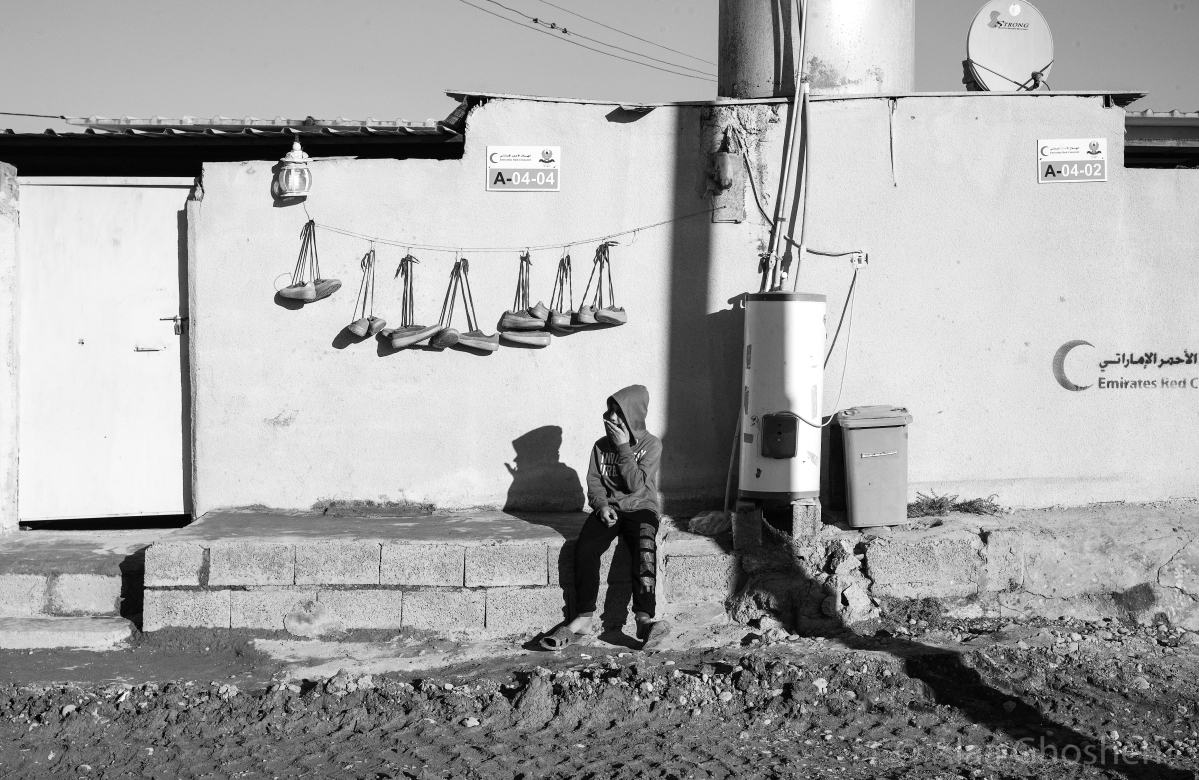 The end of 2016 was my first encounter with a part of the world that was always far away, not geographically but borders and labels and all. Stateless with an Israeli travel document, I’ve never even met people from my own region.

Working with the United Nations offered me that experience when I got an assignment to teach photography for some amazing communications officers from all over Iraq, it was my first time teaching something I love so much in a context I have never been a part of before.

There I was, flying across the Atlantic last minute to my brother’s wedding in Jerusalem for one night then waking up in Istanbul en route to Irbil, on an almost empty plane with an extremely young flight crew “ like with pimples covering their faces “  Suddenly, I notice this man smiling and looking so angelic, regardless of his muscles spilling outside the frame of the photo I had in mind. One minute after, I approached him and tried to get my photo but our language skills didn’t help at that moment at all and I might have oversold myself since the only expression I could read of him was “ you are such a dick”.  I guess I  didn’t give him a chance to shine. Shortly after landing he was escorted  before “all of us” (me and another 7 passengers). Naturally I confused everyone at passport control, travel documents never seem to make sense to them. Finally, they let me out and I see it, “Nezar Ghazali, winner of the international bodybuilding championship in Greece” all caps. I get my chance to photograph him and I move on to what I was brought here to do.

Part of the workshop was conducting field visits where all these photos were taken – of Syrian refugees and other internally displaced people around the time the fight with ISIS was at its peak. Naturally I get food poisoning and end up throwing up behind peoples tents, just adding more to their misery.

The trust with people when they smile for you or your camera is so intense and never easy to grasp. You think you are used to that, from experience photographing refugees for the last years. One thing I’ve learned though is that smile doesn’t always mean trust,  the truth is that you will leave them after taking these shots, most of the time people are just too exhausted to argue so they smile, especially the young ones. 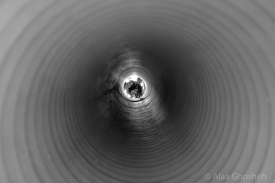 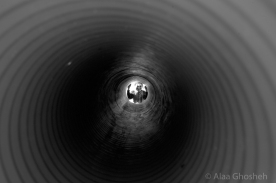 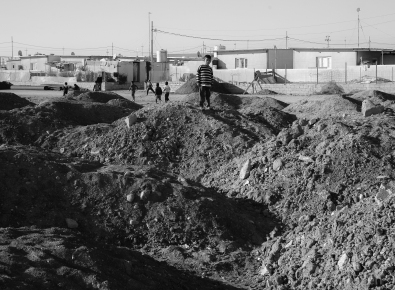 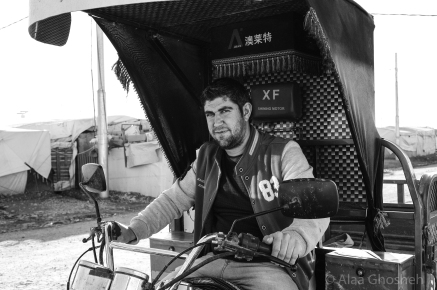 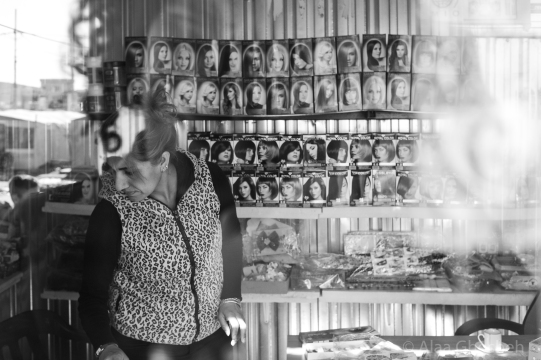 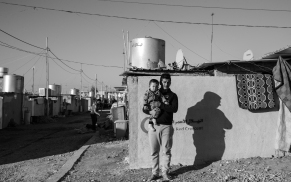 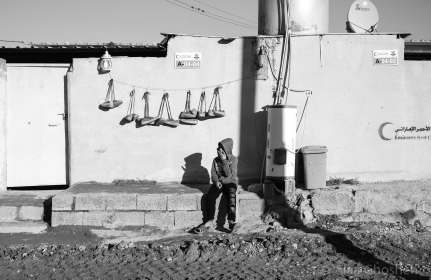 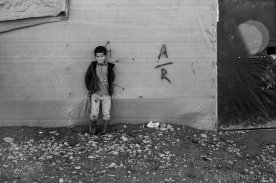 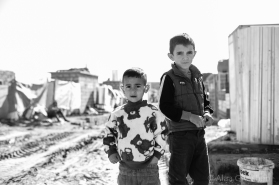 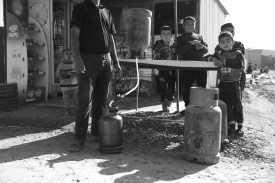 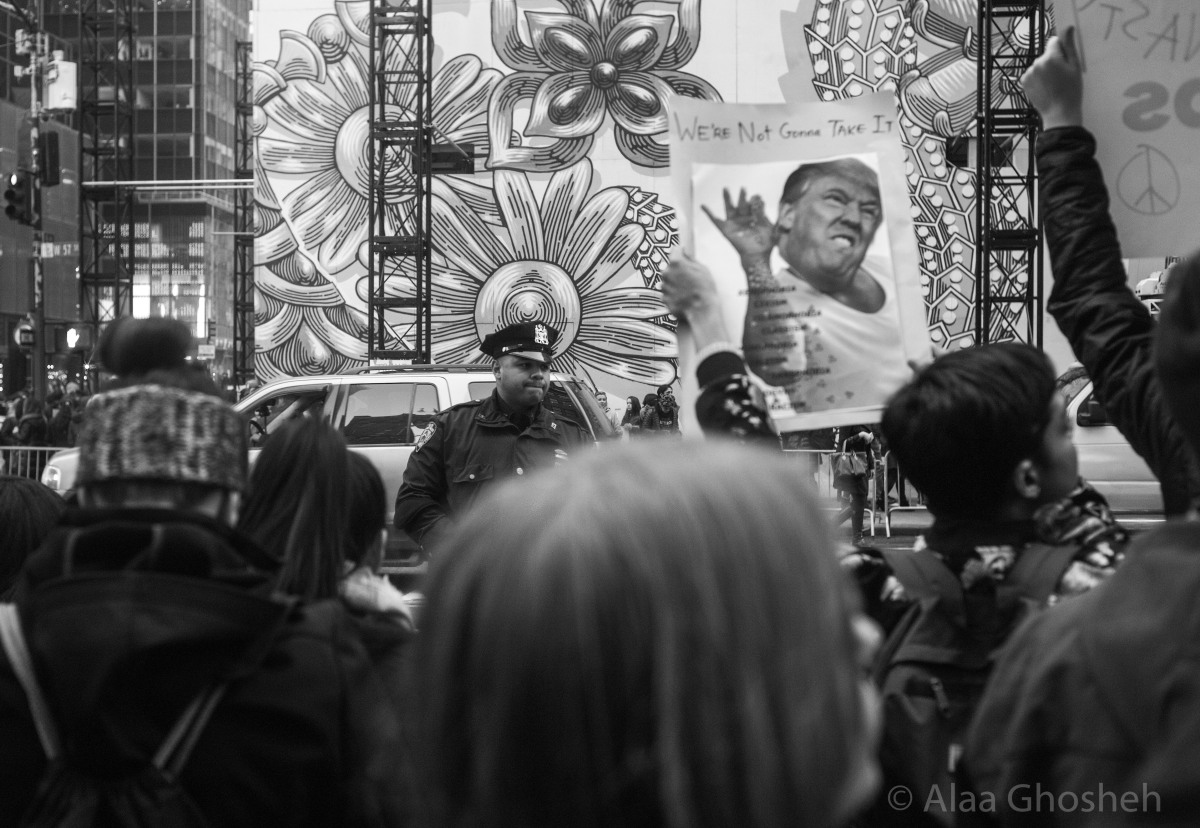 Daily life photography in everyday scenery in the midst of New York city, “ yes the most photographed city in the world”.  All the way from my flat in Brooklyn to Queens, Manhattan and even the suburbs. Fun point to start with, so if you don’t know yet, I’m Palestinian – born and raised in the old city of Jerusalem currently under Israeli occupation, previously under British Mandate (who I will sue one day) and Ottoman rule. It’s crazy, I left Palestine and then my best option for a flat was at the old Jewish psychiatric hospital of Brooklyn, lol. Shouldn’t complain as it was just next to the S, 4, 5 trains, recently gentrified neighborhood and marvelous happy hours… worth $2,000 a month for 50 square meters.

Mixed feelings of the present when one wouldn’t think of home; Jerusalem.  Looking at what alternative life would have been, wondering almost everyday and facing different encounters, hundreds of thousands of diverse ethnicities,  Trying yet again to establish trust with neighbors, knowing that they won’t take your home since you are finally on the other side of that ‘promised land’. Oh one more thing; its such an amazing feeling to know that your neighbors are not all soldiers and any given minute they could put on their uniform and walk over you anyway, I still laugh so hard whenever its almost Sabbath and I’m asked, in Brooklyn’s Crown-Heights, by fine biblical boys “Are you Jewish?”. Even my regular drinking buddies assuming the cute, curly haired boy with the anonymous accent was Israeli, after correcting them they would still rather hear “Pakistan” than “Palestine. Pink washing propaganda …. yet its sweet in a weird way, it reminds me of that pink matter I attempt to avoid whenever I think of home, all the sudden I’m looking and looking for visual distraction, thinking of and listening to Gill Scott Heron. Lived in other countries before, never thought of missing home. It wasn’t easy or smart, thinking to do that in such a city, looking at its intensity and volume. Sinking thoughts of others who loved and hated and lived in another time.

All of a sudden, Trump won. Leaving the city with true and champagne activists.  People stuck at airports and the city moves on. Packing my stuff again… worried about more visas and how long this travel document will last.

Shots taken around the center of the old city in Istanbul. The “Walled City” is the oldest part of Istanbul, street life and daily tasks merge together against the backdrop of a bustling metropolis. 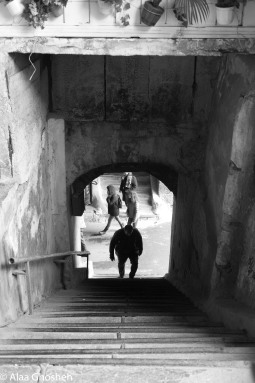 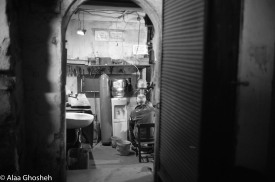 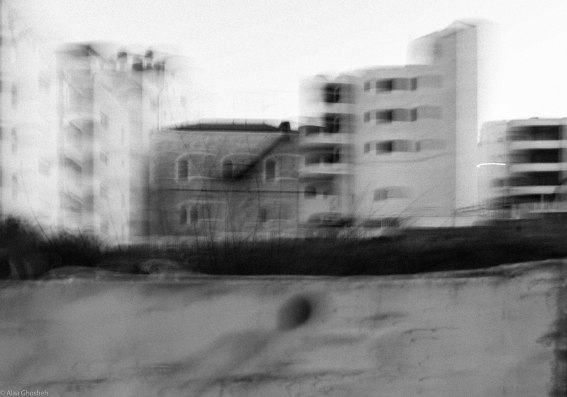 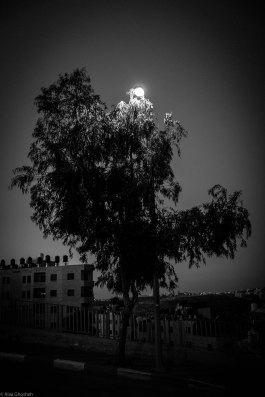 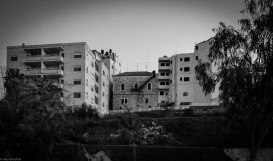 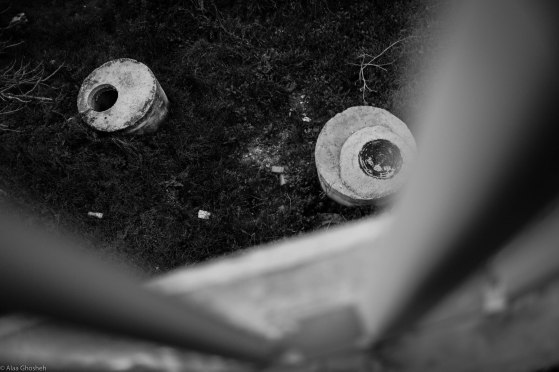 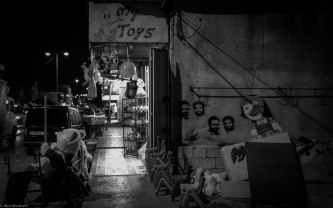 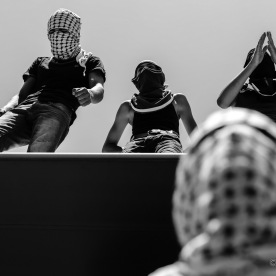 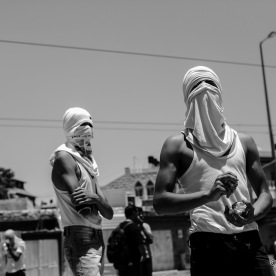 A moment of rest after the clashes calmed down a little by the end of the day
Loading Comments...